Stan Lee, the co-creator of Marvel Comics and a pioneer in American pop culture, is being accused of promoting Chakra The Invincible NFTs without permission. Stan Lee’s Twitter account has received negative feedback from people claiming that he helped promote this game without getting paid for it.

Stan Lee is a famous comic book creator who has been credited with creating some of the most iconic Marvel characters. He was also the co-creator of Spider-Man and Black Widow, two characters that are now owned by Sony Pictures Entertainment and Disney, respectively. Stan Lee’s Twitter account was recently used to promote Chakra The Invincible NFTs, which is a cryptocurrency that contains an in-game token for Marvel fans to use. Fans were quick to blast the use of Stan Lee’s Twitter account to promote this cryptocurrency. 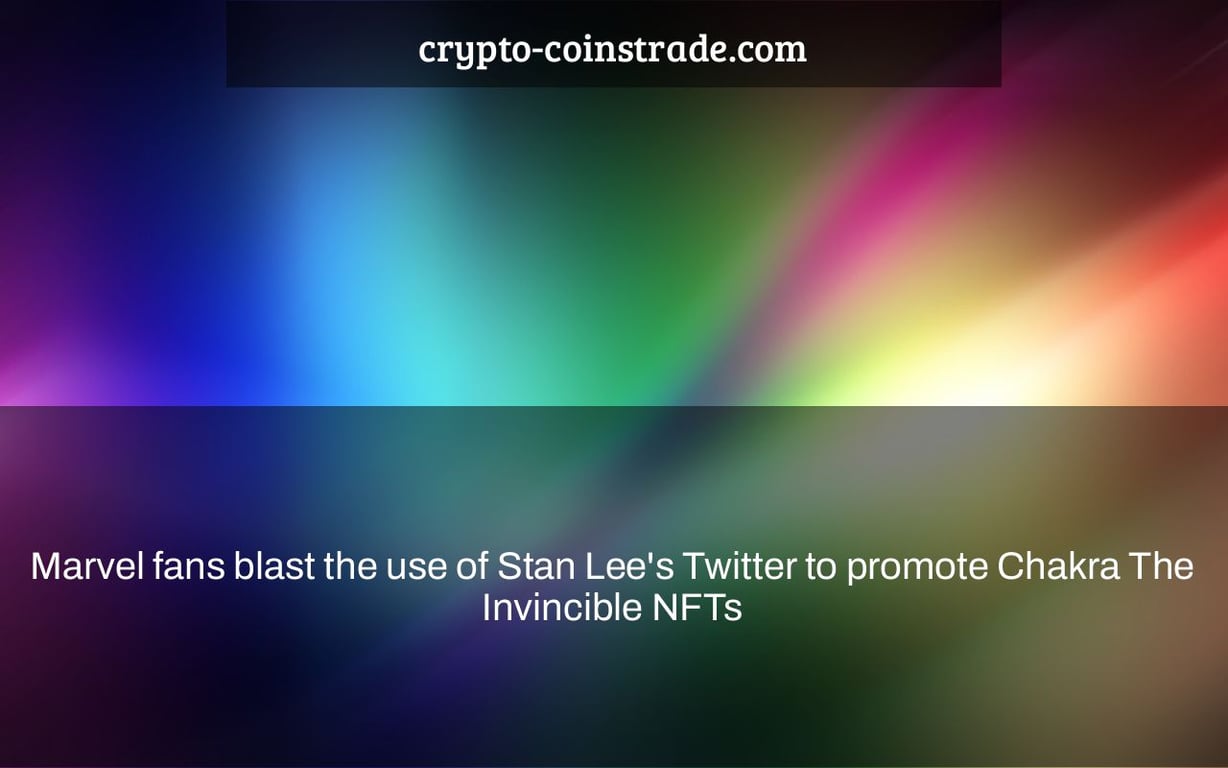 On Tuesday of this week, the official Stan Lee Twitter account tweeted about a new collection of Chakra The Invincible NFTs.

“From advocating for diversity to adopting new technology, Stan was always one step ahead of the pack. Stan’s first Indian hero, Chakra The Invincible, emerges in his own NFT (digital art) collection from 7:30pm PT 12/27-12pm PT 12/29 to salute his revolutionary spirit! http://chakraverse.io/signup”

Lee died in November 2018 at the age of 95 from cardiac arrest and respiratory failure. Before then, there had been a lot of conjecture about his health. In 2017, after postponing two big convention appearances due to an unexplained illness, he gained notoriety.

Some Marvel fans, on the other hand, have slammed Lee’s use of Twitter to promote Chakra NFTs. They claim that this “disrespects” his name.

Chakra The Invincible NFTs are on their way.

Chakra is one of Lee’s lesser-known characters, compared to The Hulk, Spiderman, and Iron Man.

“Chakra The Invincible follows the narrative of Raju Rai, a young Indian student living in Mumbai, and was created in 2012 by iconic comic book artist and icon STAN LEE and Graphic India founder and creator Sharad Devarajan.”

Raju and his mentor, the scientist Dr. Singh, develop a suit that awakens the mystical chakras of the body, thereby releasing superhuman abilities, with the goal of revealing the mysteries of human potential via science.

However, Raju is inadvertently connected to the outfit. With that, he promises to utilize his abilities to defend the city.

There are three collections in the Chakra drop. The first is a blind purchase of 6,880 unique generative art pieces of characters from the graphic book via a loot box.

The second event is an auction of NFT animations, as well as a hand-signed lithograph by Lee for each of the seven chakras of the body.

The third auction is for a 200-page comic book, as well as the chance to bid on the original comic book with a 3D cover.

What the fans had to say about the game

Lee’s Twitter account and character rights are currently in the custody of POW! Entertainment, a U.S. media firm Lee co-founded in 2001.

A Reddit user slammed the decision, claiming that a Chakra NFTs collection doesn’t respect Lee. He goes on to say that this is a money grab based on his legacy.

“I despise it when Stan Lee is exploited to promote anything. They can’t let the guy lie in peace, even if he is dead. Stan Lee was my childhood hero, and witnessing this firm profit off his name and inventions breaks my heart.”

But there’s no way of knowing if Lee would have approved of this. This is especially true considering the recent popularity of NFTs in the sports and entertainment industries.

The most relevant daily news in the worlds of crypto, DeFi, NFTs, and more are summarized here.

Crypto-themed gifts that have you covered during the Holidays